In this passage, we see the following events in Jesus' ministry:

All of these events take place between the first and second Passover Feasts of Jesus' ministry.

On the occasion of the imprisonment of John the Baptist, Jesus and his disciples (by way of Samaria) go to northern Israel, back to Galilee where he was raised. We follow John's chronology here. In the verses leading up to this passage, Jesus had left Judea and headed through Samaria where he spent some time with the Samaritans in John 5:1-42 (see notes).

Matthew's mention of John the Baptist's imprisonment seems to suggest that Jerusalem was a little too hostile at that point in time toward the Messianic message. John makes a curious statement in verse 44 in light of what is called a successful mission in verse 45. Notice verse 44 where John quotes Jesus as saying, "...a prophet hath no honour in his own country." That comment seems out of place in this passage in view of the fact that the people of Galilee are very responsive here (verse 45). Remember, John wrote his account of Jesus' ministry after the crucifixion. He is obviously giving us a little insight here regarding Galilee - insight provided also by Matthew and Mark later on after a less successful trip into Galilee (Matthew 13:54-58; Mark 6:1-6, see notes). Apparently John just wanted his readers to have a complete perspective regarding the people of Galilee at the outset. This comment takes on more meaning in the context of Jesus appearing in the synagogue in Nazareth when he reads the prophecy of Isaiah and applies it to himself. As we'll see below, Luke adds the context to this statement by Jesus as he is rejected by the Jews in the synagogue at Nazareth in Luke 4:24 (see below). 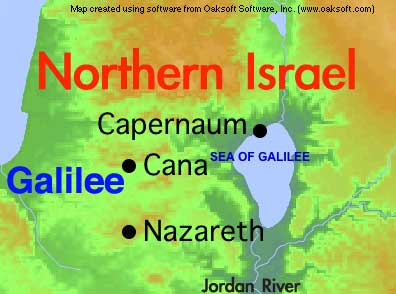 Jesus is now back in Cana (a city of Galilee in northern Israel) where he had performed his first miracle (at the wedding, John 2). He is approached by a nobleman (a high government official - either Roman or Jewish) to come heal his son. Notice the statement Jesus makes in John 4:48, "Then said Jesus unto him, Except ye see signs and wonders, ye will not believe." Again, consider what Paul said in I Corinthians 1:22 (see notes), "For the Jews require a sign, and the Greeks seek after wisdom.". It was just the Jewish way. It is important to understand that Jesus came to perform miracles, not because they needed to be done, but to establish his identity as the Messiah. That statement becomes significant in light of the healing and miracle mission to which some Believers today feel they are called. There were many people in Jesus' day who were not healed and many situations that could have been remedied by a miracle, but were not. The purpose for Jesus' supernatural displays was not to remedy all physical sufferings around him and solve all problems, but rather the much greater mission of establishing his authority over the elements as God in the flesh. Now that's a mission!

You will notice that Jesus does not actually go to Capernaum (approximately 16 miles northeast of Cana) to personally oversee the healing of the official's son. We see in verse 50, "Jesus saith unto him, Go thy way; thy son liveth. And the man believed the word that Jesus had spoken unto him, and he went his way." As it turns out, this is the exact hour when the son is healed, leading to the conversion of the nobleman's household.

Still in the region of Galilee, Jesus goes into the synagogue back in his hometown of Nazareth (7 miles south of Cana). When given the opportunity to read, he chooses Isaiah 61 (see notes). After reading, Jesus closes the book and makes this statement in verse 21, "This day is this scripture fulfilled in your ears." He then proclaims to them that they are not of a mind set to accept him, but neither were the people in the days of Elijah - especially in his own hometown (verse 24). Sure enough, they make an unsuccessful attempt to put him to death. It is worth making note here that this is the first rejection of Jesus as the Messiah by the Jews. You will recall the statement Jesus made in John 4:44, "...a prophet hath no honour in his own country." Well here it is! And Jesus points out in verse 24 to the people in the synagogue, "No prophet is accepted in his own country."

Jesus himself comments on his healing and miracle ministry on this occasion beginning in verse 23, "And he said unto them, Ye will surely say unto me this proverb, Physician, heal thyself: whatsoever we have heard done in Capernaum, do also here in thy country." In other words, he perceives that they would have him prove his Messiahship by healing everyone in the region. However, he calls upon the life and ministry of two prophets, Elijah in I Kings 17:8-24 (see notes) and Elisha in II Kings 5:1-18 (see notes). With regard to Elijah, he only raised the son of one widow woman, and Elisha only healed Naaman of leprosy. Neither of these well-respected Hebrew prophets extended their healing abilities to entire regions. As stated above (see notes), Jesus did not come with the intention of healing all of the sick, but to establish himself as the Messiah for whom the Jews had been waiting.

Matthew 4:17 perhaps needs some explanation here. What is this message Christ is preaching? Is it salvation by grace like we experience today? Essentially, but not exactly. Keep in mind that at this point in time the Jews have an opportunity to receive Jesus as the Christ (Messiah). The message Christ is preaching is one of repentance leading to the establishment of the earthly Davidic kingdom. That's the message of the Kingdom of Heaven. That's the message the Jews rejected. Notice the exact words of Jesus in verse 17, "From that time Jesus began to preach, and to say, Repent: for the kingdom of heaven is at hand." The Greek verb for "repent" is "metanoeo," which means to "think differently" or "change one's mind." The emphasis here with the use of the word "repent" is to encourage them to change their minds about the presence of the Messiah in their midst. Back in Nazareth he had recently proclaimed himself to be that promised Messiah; now the people must process that information and change their minds and attitudes to accept it.

Matthew points out that Christ fulfills another Old Testament prophecy on this road trip found in Isaiah 9:1-2 (see notes) - the preaching of the gospel to the inhabitants of Galilee. He quotes Isaiah in Matthew 4:14-16. Matthew explains from Isaiah's prophecy that the same territory of Israel that first fell to Assyrian captivity would be the first to see the Messiah. After all, Jesus came from Galilee (that same northern territory) about which Isaiah gives his Messianic prophecy in that passage. In my opinion, Isaiah 9:1-7 (see notes) is perhaps the most significant prophecy concerning the identity of the Messiah to be found in the Old Testament.

Everybody loves a good fish story. How about this one: Peter and his crew fish all night and catch nothing. When Jesus shows up the next morning and tells him to simply cast the net to the other side of the ship, they catch more than they could handle. This story becomes extremely significant because of Peter's response in verse 8 when he acknowledges his sin of doubt and declares Jesus as Lord. Something else happened as a result of that incident; they all (Peter, Andrew, James and John) left their lifelong trade - fishing. We see the calling of four of the disciples in John 1:35-51 (see notes). A complete list of the twelve apostles may be found in that summary also.

Incidentally. we see Luke using a more specific name for the Sea of Galilee, "the lake of Gennesaret." This lake is 12.5 miles long, and from 4 to 7.5 miles across. Its surface is 682 feet below the Mediterranean with a depth from 80 to 160 feet. This body of water gets a lot of mention in the Gospel accounts, being in Northern Israel where Jesus and his disciples spent a great deal of time during Jesus' ministry.

Jesus moves into Capernaum. There is no question in the minds of the demons who Jesus is - the Messiah! Notice the clear reference the demon makes to Jesus when he proclaims you are "the Holy One of God," a clear reference to Jesus as the Messiah by an ambassador of Satan himself. The people observing this miracle of Jesus casting out this demon were impressed at the authority over demons demonstrated by Jesus. Notice Mark's comment regarding the teaching of Jesus in verse 22, "And they were astonished at his doctrine: for he taught them as one that had authority, and not as the scribes." Ouch! If you're a scribe, a professional teacher and writer by trade, that comment's gotta hurt! We then see that Jesus becomes famous in the region of Galilee, but he's not making any friends with the Jewish leadership.

By the way, Peter was married - or at least had been married. Otherwise how could you have a mother-in-law? Peter's mother-in-law lived in Capernaum (in Galilee). And we also see that his mother-in-law was grateful for the healing.

It is interesting to note here that the reputation of Jesus had spread here in Capernaum to the point that many people came to him with demon possession and sickness. Jesus cast the demons out and healed all of the sick.

Matthew correlates this power over sickness demonstrated by Jesus to a prophecy by Isaiah...the one in Isaiah 53:4 (see notes), "Surely he hath borne our griefs, and carried our sorrows: yet we did esteem him stricken, smitten of God, and afflicted." In actuality, the Hebrew word for "griefs" is "choli" which is almost always translated "sickness" in the Old Testament. The Hebrew word for "sorrows" is "mak-obe," a word expressing the result of that sickness being "pain" or "sorrow." So, this verse tells us that Jesus suffered the physical ailment and resulting pain of the cross on our behalf. However, he was counted as rejected by God as he was enduring that pain. Matthew captures the essence of this verse when he quotes it in verse 17, "That it might be fulfilled which was spoken by Esaias the prophet, saying, Himself took our infirmities, and bare our sicknesses." One might get the impression from the English translation of Isaiah 53:4 (see notes) that this verse refers to spiritual grief and sorrow, but Matthew makes it plain that it is "infirmities" and "sicknesses" i.e. physical suffering. I might add that, while the Hebrew in this verse clearly depicts physical suffering and not spiritual, the Septuagint (Old Testament in Greek) actually gets it wrong by translating the Hebrew "choli" as "hamartia," the word for "sin." Perhaps this faulty Greek translation has led to the common misunderstanding of this verse to be regarded as spiritual grief and sorrow rather than physical. Nonetheless, Matthew renders it correctly in verse 17. Here's that reality: Jesus has power over sickness, a reality he demonstrated in Matthew 8:16.

This verse became the basis for many to have a "quiet time" in the morning for devotions.

So there in Northern Israel, in the vicinity of his hometown, Jesus acquires a significant following of folks as he performs miracles and healings. As a matter of fact, Matthew 4:25 says, "And there followed him great multitudes of people from Galilee, and from Decapolis, and from Jerusalem, and from Judaea, and from beyond Jordan." And verse 24 indicates the popularity of Jesus North of Israel into Syria.