Moses continues to go over the plans for moving into Canaan. The Levites are going to be city dwellers. Those cities will be provided by each of the remaining twelve tribes spread throughout the soon-to-be-acquired land along with the allotments already occupied by Reuben, Gad and half of Manasseh on the east side of the Jordan River. And they'll be given land outside the walls of their cities for the purpose of grazing their livestock. Altogether there are to be 48 of these cities spread throughout the land. Larger tribes will provide 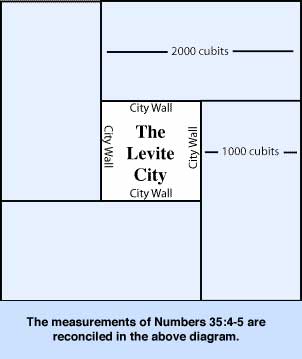 more land for these cities than the smaller tribes. Six of the 48 cities (three east of the Jordan and three west) are to be designated cities of refuge. The cities that were later selected are Bezer, Ramoth-Gilead, and Golan on the east side of the Jordan River, and Hebron, Shechem, and Kedesh on the west side (Deuteronomy 4:43 (see notes); Joshua 20:7-8, see notes; Joshua 21:13,21,27,32,36,38, see notes). The specifications for circumstances whereby these cities can be used by fugitives is seen in verses 9-34 (see below).

In addition to the area inside the city walls for the Levites, a prescribed area for each of these 48 cities was to be designated outside the walls for the purpose of grazing their cattle. The difference between the designations of 1,000 cubits in verse 4 and the 2,000 cubits in verse 5 is illustrated in the diagram to the right. Both numbers are correct. So, here it is to be...just as Jacob had told Levi back in Genesis 49:7 (see notes), "I will divide them in Jacob, and scatter them in Israel." Levi will not have their own tribal land award, but will be spread throughout Israel. The irony of the whole situation regarding the fulfillment of Jacob's blessing is that the Levites end up fulfilling that blessing by Jacob in a totally-unexpected fashion. They're a tribe of priests...prestigious priests!

You better get out of town fast...and head for one of these cities of refuge (six of them, three on each side of the Jordan River, see above). These cities only worked if you committed an "I-didn't-mean-to" murder. You still had to be tried, but were supposed to be safe until the trial. Secular sources tell us that this is the way the law worked in that era among virtually all the nations. Blood relatives personally avenged the blood of their kin. We see provisions in verse 15 for the "stranger" as well as the Hebrew. There's the principle of avenging one's kin in verse 19, "The revenger of blood himself shall slay the murderer: when he meeteth him, he shall slay him." That convention originated in Genesis 9:6 (see notes), "Whoso sheddeth man’s blood, by man shall his blood be shed: for in the image of God made he man." If you committed a premeditated murder, you're on your own. But what if it was an accident? Then head for one of these cities and ask for a trial (verses 22-25). At least you're safe until the trial. However, if they find you guilty of premeditated murder, the city provides no safety after that. If found innocent of premeditated murder, the city alone provides safety from one's avenger (verses 26-27). Leave the city and you're on your own. One caveat though - after the High Priest dies, that accidental manslayer can go back to his home, and the avenger no longer has a right to avenge the death of his relative. If I were the High Priest, I'd be a little cautious about accepting meals from these fugitives, though, based on verse 28.

An accused murderer could not be executed on the basis of just one eyewitness (verse 30). You will notice in this chapter the general guidelines for determining manslaughter instead of pre-meditated murder. Even under the Mosaic Law, determining guilt for capital murder has never been easy.

Israel's women: we want to keep our property! (Numbers 36)

This is an addendum to an exception that was made back in Numbers 27:1-11 (see notes). At that time, the daughters of Zelophehad (of the tribe of Manasseh) had come to Moses about an inequity. Their father had died in the wilderness leaving no sons - just daughters. Moses decreed that their father's inheritance, when they occupied the land of Canaan, would go to them.

However, there was still a problem. The "chief fathers" want to protect the interests of the Tribe of Manasseh here against the possibility of losing territory assigned to members of that tribe. So, here are the stipulations Moses adds to his previous ruling on the issue. Ordinarily, if these women married the men of another of the Tribes of Israel, their property rights would transfer over to that tribe. You will recall that in the Jubilee year, all property reverted back to its original tribal families. (Click here to see the notes regarding the Jubilee year.) Well, you can see the problem. Property awarded to these women on behalf of their father would end up in the hands of another tribe altogether if they were to marry someone from another tribe. The solution: Cut down their field of eligible bachelors; Moses decrees that they will only be allowed to marry someone within their own tribe (Manasseh). Thus, in the year of Jubilee, the property remains with the original tribe. Problem solved!

The daughters of Zelophehad (of the tribe of Manasseh) receive their inheritance in Joshua 17:1-18 (see notes).