Twenty-year-old Ahaz was just like the wicked Kings of Israel - no regard for the one true God. He even sacrificed his children on the pagan altar and rebuilt the altars to Baal. God abandons him because of his evilness. Syria and Israel (Northern Kingdom under King Pekah) team up against Judah (II King 15:37, see notes). First, King Resin of Syria comes after him and defeats him. Then it's his distant relatives from Israel who come and whip up on Judah - even take 200,000 prisoners to serve as slaves, but God speaks through the prophet, Oded, and makes Israel give them back.

Then the Edomites attack...and the Philistines too. What's a king to do? Against the counsel of Isaiah (Isaiah 7, see notes), Ahaz sends to Tiglathpileser of Assyria for help. He pays for this mercenary help by taking treasures from the temple. The problem is that Assyria doesn't actually help to any large degree. They do attack and beat the Syrians, but little more. When Ahaz makes his trip to Damascus, Syria after King Tiglathpileser of Assyria had taken that city, he is impressed with the Syrian gods he sees there. Never mind that those gods had not protected Syria from defeat against Assyria. He sends orders back to Jerusalem to the high priest, Urijah, to build an altar like the one in Syria. After some remodeling in Solomon's temple, they make way for a new kind of worship throughout Judah. Ahaz finally dies after a miserable 16-year reign; while he is buried where his ancestors were buried, they don't bury him in the same tomb with the other kings; he's just not worthy.

Here's the rest of the story on the damage done by Ahaz. Certainly...the Northern Kingdom (Israel) had abused Ahaz. However, Isaiah promised Ahaz deliverance without the assistance of Tiglathpileser of Assyria (Isaiah 7, see notes). By inviting Assyria into the region for his protection, he actually facilitated the Assyrians in their move against the entire region. Subsequently, Assyria conquers and deports three and one-half of the tribes of Israel to Assyria in 733 B.C. (II Kings 15:29, see notes), followed by the remaining tribes eleven years later (II Kings 17:6, see below), and eventually, in 701 B.C., to bring about Judah’s own devastation by the armies of Sennacherib (II Kings 18:13-19:37; II Chronicles 32:9-22; Isaiah 36-37, see notes). After that assault upon Judah, only Jerusalem remained unclaimed by Assyria...but only after a miracle from God himself. As you can see, Ahaz did a great deal of damage during his short reign as King of Judah.

The wicked King of Israel, Hoshea, paid off the King of Assyria (Shalmaneser V, son and successor to Tiglathpileser III), not to attack. However, it all fell through when Hoshea double crossed him by working another deal with So, the King of Egypt - a bad deal which landed King Hoshea in an Assyrian prison. Assyria subsequently came in and captured the Northern Kingdom in 721/722 B.C. So, Hoshea has the distinction of being the last king of the Northern Kingdom also known as Israel.

7 For so it was, that the children of Israel had sinned against the LORD their God, which had brought them up out of the land of Egypt, from under the hand of Pharaoh king of Egypt, and had feared other gods,
8 And walked in the statutes of the heathen, whom the LORD cast out from before the children of Israel, and of the kings of Israel, which they had made.
9 And the children of Israel did secretly those things that were not right against the LORD their God, and they built them high places in all their cities, from the tower of the watchmen to the fenced city.
10 And they set them up images and groves in every high hill, and under every green tree:
11 And there they burnt incense in all the high places, as did the heathen whom the LORD carried away before them; and wrought wicked things to provoke the LORD to anger:
12 For they served idols, whereof the LORD had said unto them, Ye shall not do this thing.
13 Yet the LORD testified against Israel, and against Judah, by all the prophets, and by all the seers, saying, Turn ye from your evil ways, and keep my commandments and my statutes, according to all the law which I commanded your fathers, and which I sent to you by my servants the prophets.
14 Notwithstanding they would not hear, but hardened their necks, like to the neck of their fathers, that did not believe in the LORD their God.
15 And they rejected his statutes, and his covenant that he made with their fathers, and his testimonies which he testified against them; and they followed vanity, and became vain, and went after the heathen that were round about them, concerning whom the LORD had charged them, that they should not do like them.
16 And they left all the commandments of the LORD their God, and made them molten images, even two calves, and made a grove, and worshipped all the host of heaven, and served Baal.
17 And they caused their sons and their daughters to pass through the fire, and used divination and enchantments, and sold themselves to do evil in the sight of the LORD, to provoke him to anger.
18 Therefore the LORD was very angry with Israel, and removed them out of his sight: there was none left but the tribe of Judah only.
19 Also Judah kept not the commandments of the LORD their God, but walked in the statutes of Israel which they made.
20 And the LORD rejected all the seed of Israel, and afflicted them, and delivered them into the hand of spoilers, until he had cast them out of his sight.
21 For he rent Israel from the house of David; and they made Jeroboam the son of Nebat king: and Jeroboam drave Israel from following the LORD, and made them sin a great sin.
22 For the children of Israel walked in all the sins of Jeroboam which he did; they departed not from them;
23 Until the LORD removed Israel out of his sight, as he had said by all his servants the prophets. So was Israel carried away out of their own land to Assyria unto this day. 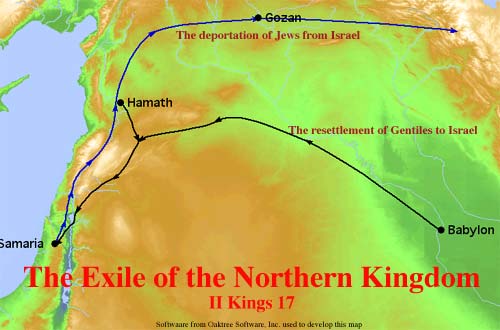 Israelites were deported out of Samaria into greater Assyria. Why? It destroys national pride - makes it easier to control the masses. When you're running an empire, that's important. A discourse is found here outlining why Israel fell (worship of pagan gods, verses 7-12), despite warnings from God's prophets (verse 13). However, they continued with their rejection of God (verses 14-17), until we see a sobering verse 18, "Therefore the LORD was very angry with Israel, and removed them out of his sight: there was none left but the tribe of Judah only."

Judah is still intact at this point, but we see in verse 19 that they don't lag far behind Israel in their wickedness. Then, beginning in verse 20, you will notice that Jeroboam, the first King of Israel after the reign of Solomon, gets the credit for corrupting Israel beyond repair. He set up calf worship from the very beginning, and Israel never served God from that point until their fall to the Assyrians.

24 And the king of Assyria brought men from Babylon, and from Cuthah, and from Ava, and from Hamath, and from Sepharvaim, and placed them in the cities of Samaria instead of the children of Israel: and they possessed Samaria, and dwelt in the cities thereof.
25 And so it was at the beginning of their dwelling there, that they feared not the LORD: therefore the LORD sent lions among them, which slew some of them.
26 Wherefore they spake to the king of Assyria, saying, The nations which thou hast removed, and placed in the cities of Samaria, know not the manner of the God of the land: therefore he hath sent lions among them, and, behold, they slay them, because they know not the manner of the God of the land.
27 Then the king of Assyria commanded, saying, Carry thither one of the priests whom ye brought from thence; and let them go and dwell there, and let him teach them the manner of the God of the land.
28 Then one of the priests whom they had carried away from Samaria came and dwelt in Bethel, and taught them how they should fear the LORD.
29 Howbeit every nation made gods of their own, and put them in the houses of the high places which the Samaritans had made, every nation in their cities wherein they dwelt.
30 And the men of Babylon made Succothbenoth, and the men of Cuth made Nergal, and the men of Hamath made Ashima,
31 And the Avites made Nibhaz and Tartak, and the Sepharvites burnt their children in fire to Adrammelech and Anammelech, the gods of Sepharvaim.
32 So they feared the LORD, and made unto themselves of the lowest of them priests of the high places, which sacrificed for them in the houses of the high places.
33 They feared the LORD, and served their own gods, after the manner of the nations whom they carried away from thence.
34 Unto this day they do after the former manners: they fear not the LORD, neither do they after their statutes, or after their ordinances, or after the law and commandment which the LORD commanded the children of Jacob, whom he named Israel;
35 With whom the LORD had made a covenant, and charged them, saying, Ye shall not fear other gods, nor bow yourselves to them, nor serve them, nor sacrifice to them:
36 But the LORD, who brought you up out of the land of Egypt with great power and a stretched out arm, him shall ye fear, and him shall ye worship, and to him shall ye do sacrifice.
37 And the statutes, and the ordinances, and the law, and the commandment, which he wrote for you, ye shall observe to do for evermore; and ye shall not fear other gods.
38 And the covenant that I have made with you ye shall not forget; neither shall ye fear other gods.
39 But the LORD your God ye shall fear; and he shall deliver you out of the hand of all your enemies.
40 Howbeit they did not hearken, but they did after their former manner.
41 So these nations feared the LORD, and served their graven images, both their children, and their children’s children: as did their fathers, so do they unto this day.

To finish off the task, the Assyrians bring foreigners in to populate Israel since many of the Israelites had been deported. The Assyrians had a little problem, though; the new people weren't familiar with the religious practices in Samaria (WHAT RELIGIOUS PRACTICES?). Interestingly enough, this results in attacks by lions which the King of Assyria attributes to the new inhabitants' lack of familiarity with Israel's God. So they send back to where the Israelites had been deported for a Samaritan priest to provide orientation for the new inhabitants of Israel. So, the corrupted practices of religion instituted by Jeroboam became one of the many religions of the Assyrian Empire in Israel...with a sprinkling of Jehovah worship added into the mix. Why did Israel fall? They did not follow the one true God. This record continues in II Kings 18 (see notes).