The 38+ years of wilderness wandering for which there is no detailed account begin here (see table below).

Okay, so maybe this chapter is not the most interesting reading, but there is some very helpful information here. For instance, just from reading the incidents of Exodus through Numbers 32, it may seem that Israel did not often break camp and move on during their 40 years in the wilderness. However, there is a gap of 38+ years of recorded activity that begins somewhere between the return of the spies in Numbers 14 (see notes) and the beginning of Numbers 20 (see notes). It cannot be known with absolute certainty when exactly the events of chapters 15-19 took place; but Numbers 16 (see notes) reads like the events of that chapter took place at the beginning of the 38+ years. Also, the instructions of Numbers 17-19 appear to be given in the aftermath of the tragic events of Numbers 16. For that reason, I'm relatively certain that the 38+ year gap takes place between Numbers 19 and 20 (see notes). This record bridges that gap by giving the route which Israel took during this time in verses 19-36. This is the only place in scripture where we get a complete overview (although without details) of their wilderness journey.

The 17 camp sites mentioned in verses 19-36 between Rithmah and Kadesh, are the places at which Israel set up in the desert, from their return from Kadesh into the “desert of the way to the Red Sea” (Numbers 14:25, see notes), till the reassembling of the whole congregation in the desert of Zin at Kadesh (Numbers 20:1, see notes). You may be asking, "Why are the maps of Israel's journey so vague?" The reason is that most of the place names where the Hebrews traveled were camp sites - not cities, and thus cannot be identified with certainty today. Centers of activity come and go. For example, if I asked 100 people in my community where Kenwood, Georgia is located, I seriously doubt that ten people could tell me. Fifty years from now, it is likely that no one will remember. It's no longer found on most maps and remains as just a memory for our county's old timers who used to gather around the country store at the train depot there. It even had it's own post office. That's the way it is with regard to the mapping of Israel's journeys in the wilderness; we simply have no accurate record regarding the exact location of most of these camp sites.

50 And the LORD spake unto Moses in the plains of Moab by Jordan near Jericho, saying,
51 Speak unto the children of Israel, and say unto them, When ye are passed over Jordan into the land of Canaan;
52 Then ye shall drive out all the inhabitants of the land from before you, and destroy all their pictures, and destroy all their molten images, and quite pluck down all their high places:
53 And ye shall dispossess the inhabitants of the land, and dwell therein: for I have given you the land to possess it.
54 And ye shall divide the land by lot for an inheritance among your families: and to the more ye shall give the more inheritance, and to the fewer ye shall give the less inheritance: every man’s inheritance shall be in the place where his lot falleth; according to the tribes of your fathers ye shall inherit.
55 But if ye will not drive out the inhabitants of the land from before you; then it shall come to pass, that those which ye let remain of them shall be pricks in your eyes, and thorns in your sides, and shall vex you in the land wherein ye dwell.
56 Moreover it shall come to pass, that I shall do unto you, as I thought to do unto them.

At this point, Israel is set up east of the Jordan River across from Jericho. That's just east of the north side of the Dead Sea. They are ready to go into Canaan. But first, some instructions about what to do when they get there are in order. Verse 52 says it well, "Then ye shall drive out all the inhabitants of the land from before you, and destroy all their pictures, and destroy all their molten images, and quite pluck down all their high places:" Paganism, polytheism and the people who are involved - all must go. Verse 53 says that Israel is to evict these folks. Later we see in Deuteronomy 9:4 (see notes), "Speak not thou in thine heart, after that the LORD thy God hath cast them out from before thee, saying, For my righteousness the LORD hath brought me in to possess this land: but for the wickedness of these nations the LORD doth drive them out from before thee." A similar statement is made concerning the banishment of these people from Canaan in Leviticus 18:27-28 (see notes). Verse 54 explains the process whereby Israel shall determine which tribe moves where after crossing the Jordan River into Canaan - the lottery. Casting lots was the supernatural way Israel made decisions. (For more information on casting lots, click here.)

So, what if Israel chooses not to drive out the current inhabitants of Canaan? There's your answer in verse 55, "...those which ye let remain of them shall be pricks in your eyes, and thorns in your sides, and shall vex you in the land wherein ye dwell." After a seven-year campaign of Israel inhabiting Canaan, they did not manage to drive all of the previous citizens out of the land. And, just as verse 55 says, those previous residents turned out to be a problem...a huge problem. 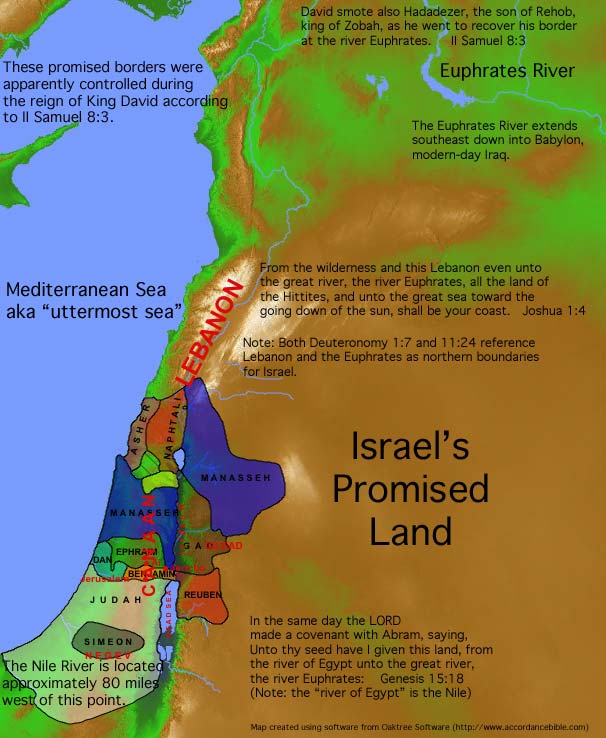 1 And the LORD spake unto Moses, saying,
2 Command the children of Israel, and say unto them, When ye come into the land of Canaan; (this is the land that shall fall unto you for an inheritance, even the land of Canaan with the coasts thereof:)
3 Then your south quarter shall be from the wilderness of Zin along by the coast of Edom, and your south border shall be the outmost coast of the salt sea eastward:
4 And your border shall turn from the south to the ascent of Akrabbim, and pass on to Zin: and the going forth thereof shall be from the south to Kadeshbarnea, and shall go on to Hazaraddar, and pass on to Azmon:
5 And the border shall fetch a compass from Azmon unto the river of Egypt, and the goings out of it shall be at the sea.
6 And as for the western border, ye shall even have the great sea for a border: this shall be your west border.
7 And this shall be your north border: from the great sea ye shall point out for you mount Hor:
8 From mount Hor ye shall point out your border unto the entrance of Hamath; and the goings forth of the border shall be to Zedad:
9 And the border shall go on to Ziphron, and the goings out of it shall be at Hazarenan: this shall be your north border.
10 And ye shall point out your east border from Hazarenan to Shepham:
11 And the coast shall go down from Shepham to Riblah, on the east side of Ain; and the border shall descend, and shall reach unto the side of the sea of Chinnereth eastward:
12 And the border shall go down to Jordan, and the goings out of it shall be at the salt sea: this shall be your land with the coasts thereof round about.
13 And Moses commanded the children of Israel, saying, This is the land which ye shall inherit by lot, which the LORD commanded to give unto the nine tribes, and to the half tribe:
14 For the tribe of the children of Reuben according to the house of their fathers, and the tribe of the children of Gad according to the house of their fathers, have received their inheritance; and half the tribe of Manasseh have received their inheritance:
15 The two tribes and the half tribe have received their inheritance on this side Jordan near Jericho eastward, toward the sunrising.

So, they haven't crossed over Jordan yet, but Moses is very specific about what property is to be Israel's for a possession. Some of these names are no longer locatable on a map, because they simply ceased to be called by that name after that. The place names for the eastern, western and southern borders are relatively easy to find on a map. The names given in this account for the northern border, extending into today's Lebanon and Syria, mention names that are no longer used. We do have a general idea of the location of that Northern border. Verse 14-15 make reference to the fact that Gad, Reuben and half of Manasseh stayed on the east side of the Jordan River.

A point of clarification is in order here. Take note of Genesis 15:18 (see notes), "In the same day the LORD made a covenant with Abraham, saying, Unto thy seed have I given this land, from the river of Egypt unto the great river, the river Euphrates:" That's from the Nile to the Euphrates. That passage has caused some confusion because the tribes of Israel did not inhabit all of that land when they arrived in the Book of Joshua, nor is that large of a land survey specified in this passage. However, later on King David did, in fact, control the territory all the way over to the Euphrates. We see this in II Samuel 8:3 (see notes) "David smote also Hadadezer, the son of Rehob, king of Zobah, as he went to recover his border at the river Euphrates." So, while the Israelites did not choose to live that far away, nonetheless David's kingdom and control extended to that point, thus fulfilling the promise God made to Abraham in Genesis 15:18 (see notes). So...to put it more succinctly, Israel's living area was smaller than the actual kingdom area would be when the covenant with Abraham would be fulfilled under King David.

Well, let's appoint a man from each tribe to be responsible for dividing the land. Here's the list; Eleazar (Aaron's son and high priest) and Joshua (Moses' successor) are placed in charge of overseeing the whole process. If you would like to see the notes on the actual lottery in Joshua 19, click here. A map of the tribe allotments can be found there as well.